Five Mile Community Church seeks to demonstrate the love of Jesus in practical ways.  We believe that it is important to be involved both around the world and in our local area. 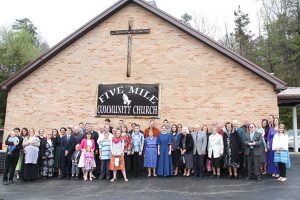 • Five Mile Community Church exists to help people find the fulfillment of a living and dynamic relationship with the Lord Jesus Christ.

• We emphasize the importance of heart holiness and a lifestyle of faithful discipleship.

Five Mile demonstrates the love of Christ locally in various ways, such as:

Five Mile invests in helping churches in our area get started, including currently:

Five Mile’s foreign missions emphasis is expressed in many ways including: 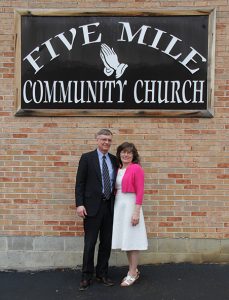 In 1923, Blanche Haddox felt God lead her to start a Sunday School. She only had an 8th grade education but that didn’t stop her. She began her Sunday School in the White Oak School house. It grew and after about 2 years, the attendance was sometimes in the 60s and 70s.

Blanche was saved as a young woman and was an earnest Christian but struggled with unforgiveness and harshness. She asked the Lord to do a deeper work in her life to deal with that, and He did.

In 1924, at the Lawson graveyard memorial service, she heard Miss McConnell testify to an experience of grace called sanctification. It was then she knew that was what the Lord had done for her. This began a friendship between Blanche and Miss McConnell who was beginning a new mission work in the mountains of Breathitt County. Blanche led her Sunday School to become a part of Miss McConnell’s Kentucky Mountain Holiness Association.

Blanch guided the Sunday School until 1941 when it became possible for students from the Kentucky Mountain Bible Institute to preach at the school house. Regular worship services were started and students from the Institute serving as pastors. Around 1950, Cliff Richards became the first regular pastor of our church.

White Oak Creek empties into the North Fork of the Kentucky River. When the river would flood, the water would back up the creek and flood the school house/church building. Eight times the church building was flooded by White Oak Creek. The furniture and piano had to be moved out of the building, sometimes by boat. The May1984 flood was a big one with water rising halfway up the walls of the building. We decided it was time to leave the White Oak building.

In 1987, the current property came up for sale. The church purchased it for $9000. There was money for the land but nothing left for a building. It took a year for us to raise the money to start construction. Many volunteers contributed many hours of labor to help build the building. Gene Light supervised the construction and did a lot of the work himself.

Pastor Karl Yoder led the first service in our current sanctuary on Easter Sunday, 1991. The current pastor, Tom Lorimer, arrived in September of 1995.

The last 20 years have seen the church grow as a congregation and reach out in influence in the community and beyond. Many student families of the nearby Kentucky Mountain Bible College have been a part of the Five Mile family while in school. They are now serving in pastorates, missions and other ministries in various parts of the country and around the world. The church’s vision for support of missions and ministries has grown dramatically. Five Mile has assisted in five church plants, invests in local ministries and supports missions in various parts of the world.
Our vision is to continue to serve the Lord Jesus here, help people come to Jesus, be better disciples, and invest in Christ’s kingdom work as we can around the world.